Talking Smack was launched in Brisbane on Thursday, 21 August 2014 at my local bookstore Avid Reader, in conversation with one of my favourite Australian writers, John Birmingham. Footage from the event is embedded below, or click here to view on YouTube.

Below is the fancy e-invite to the launch, which was attended by a full house of around 100 people in the bookstore’s courtyard. You can buy Talking Smack via Avid Reader’s web store here.

Splendour In The Grass Forum – Loaded: Honest Conversations About Drugs

I hosted a Forum panel discussion at 10am on Sunday 27th July 2014, which was the final day of the Australian music festival Splendour In The Grass. (Below photo credit: Marc Grimwade) 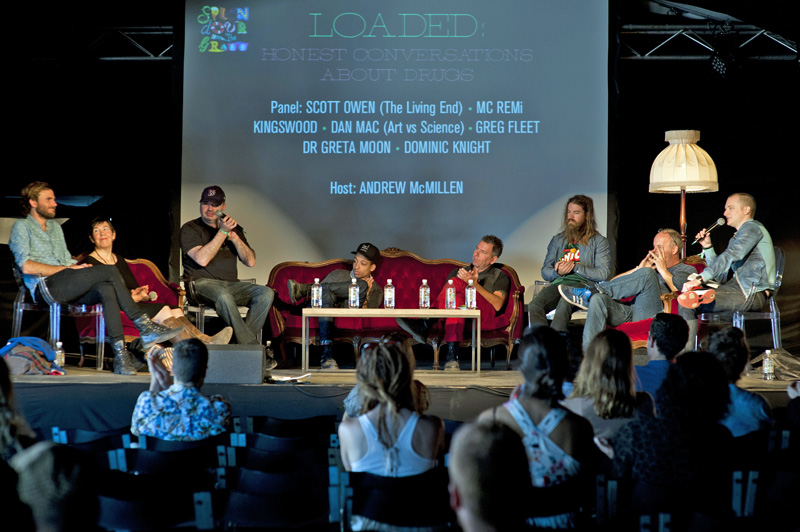 “Sex, drugs and rock and roll”. That mythical phrase has been bandied about with a wink and a grin for decades. But is it all smoke and mirrors, or does the cliché ring true for Australian artists? Do substances help or hinder creativity? Journalist Andrew McMillen, whose new book, Talking Smack: Honest Conversations About Drugs is based on interviews with 14 Australian musicians – including Paul Kelly, Gotye, Tina Arena, Steve Kilbey, Phil Jamieson, Holly Throsby and Mick Harvey – is joined by musicians Scott Owen (The Living End), MC REMi and the guys from Kingswood, as well as comedian Greg Fleet, former Au Go Go Records owner Greta Moon (now a doctor specialising in psychiatry with an interest in addiction medicine), and writer/broadcaster Dominic Knight (ABC radio, The Chaser), as they discuss their own experiences with alcohol, illicit, prescription and legal drugs, rehab and sobriety.

Audio from the panel discussion is embedded below. Note that this is an audience recording, so quality is average.

Entheogenesis Australias presentation – Can You Be Too Honest About Your Drug Use?

I gave a presentation in Melbourne at 9.20am on Saturday 6th December 2014, which was opening address of the 10th Entheogenesis Australis drug conference. An overview of my talk and footage from the event is embedded below, or click here to view on YouTube.

With the publication of his first book, Talking Smack: Honest Conversations About Drugs, journalist and author Andrew McMillen revealed his own recreational drug use in the course of discussing the topic with 14 prominent Australian musicians, including Paul Kelly, Tina Arena and Gotye. In a live interview on national television, Andrew was accused by a morning show host of advocating and glamourising drug use by choosing to speak frankly about his own experiences. In this presentation, Andrew will reflect on the sensationalist bent preferred by mainstream Australian media when it comes to the loaded topic of drug use, and explore strategies for de-stigmatising the discussion of this behaviour among the wider community.

If you are hosting an event on the themes of drug use in Australian culture, and would like to book Andrew to speak about Talking Smack, please use the contact page to arrange an appearance.