Three of Talking Smack‘s 14 chapters were published as extracts in Australian media outlets, including interviews with Steve Kilbey (The Church), Mick Harvey (ex Nick Cave and the Bad Seeds) and Bertie Blackman. These are linked below.

The first extract published was an edited version of the chapter featuring Steve Kilbey, which appeared in The Weekend Australian Review on July 26, 2014. (Note: the full chapter is around 6,000 words; the Review extract is cut down to around 3,000 words.) 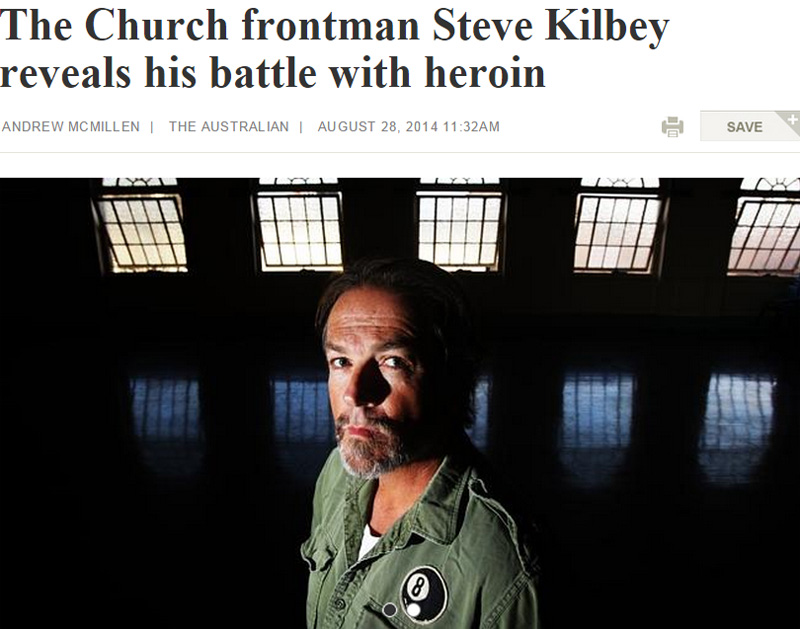 The Dark Side: The Church frontman Steve Kilbey reveals his battle with heroin

At the age of 37, Steve Kilbey found himself at a crossroads. He’d become a pop star fronting the Church, a band whose song ‘Under the Milky Way’, the lead single from their fifth album, Starfish, became a worldwide hit in 1988. He’d made quite a lot of money: he had a house and a recording studio in Sydney, a couple of cars, a load of instruments and some cash to spare. He wasn’t filthy rich, but he was certainly very comfortable.

By this point, Kilbey considered himself a worldly drug user: he had started smoking pot in his late teens, tried psychedelics soon after and bought his first gram of cocaine after making his first record, Of Skins and Heart, in 1980. Eleven years later, he was recording for a new project named Jack Frost with his friend Grant McLennan, a fellow Australian pop star best known for his work with Brisbane act the Go-Betweens. One night, while out at a bar and feeling an empty sense of unhappiness at the life he’d earned, despite his success, Kilbey was taken aback by McLennan’s proposal: “Let’s get some heroin.” [read]

To read the edited book extract of Andrew McMillen’s interview with Kilbey, visit The Australian.

The chapter featuring Mick Harvey was published on the blog of Brisbane author and journalist John Birmingham, Cheeseburger Gothic, on August 22 2014:

Amphetamine is best known as a drug of alertness: snort or shoot a line of speed and you’ll be awake far longer than the body can usually tolerate. The avoidance of sleep is one of its major benefits, especially for creative people who feel compelled to spend their time on this earth productively, rather than being laid out in bed for one-third of every day. But the drug can be used medicinally in this sense, too, especially if you’re in a band where others are burning the proverbial candle for days on end. As Mick Harvey found, using amphetamine was sometimes the only way to keep up with Nick Cave and the Bad Seeds, the band that he co-founded and managed.

In the mid-eighties, while based in Berlin, the guitarist would look around the studio and realise that his bandmates were invariably loaded on one substance or another. He’d partake in half a line of speed and stay up for two days. ‘I don’t know why they would keep going back and taking another line every two hours,’ he says. ‘There was no need whatsoever!’ Sometimes, the group would spill into a bar at seven in the morning and rage on. All of this was fun to Harvey, then in his mid-twenties, who thoroughly enjoyed being part of a band perceived then – and now – as one of Australia’s edgiest rock groups. Speed was incredibly useful on those occasions, but its medicinal purposes only stretched so far. ‘I certainly never had a desire to continue to take it every day, or to deliberately go and find some and party,’ he says. ‘I just didn’t really do that.’ [read]

The chapter featuring Bertie Blackman was published on TheVine.com.au on August 26 2014: 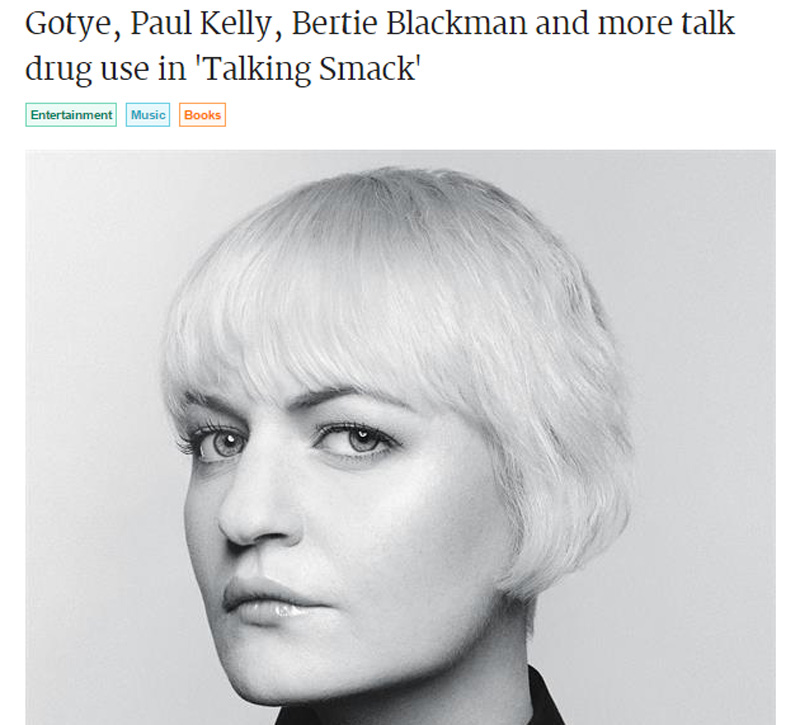 Her first thought was that she was having a heart attack. One night, on tour on Queensland’s Sunshine Coast in early 2009, the twenty-six-year-old had a sudden and terrible feeling: she couldn’t breathe. Severe chest pains were accompanied by shallow breaths. She was scared, and so were her bandmates. Next stop: the emergency department of Noosa Hospital. The diagnosis: inflamed cartilage rubbing against her ribcage. The cause: overexertion on and off stage; drinking too much alcohol too often, and feeling invincible as a result. Yet here was concrete proof that the young musician was doing serious damage to her health and that perhaps it might be a good idea to rethink things.

Anyone who saw Beatrice ‘Bertie’ Blackman perform in the years leading up to that health scare would have found her to be one of Australia’s most arresting rock frontwomen. Night after night, she’d be slugging from a bottle of Jameson between singing into the microphone, thoroughly inhabiting the loose, hedonistic image that rock history has conditioned us to expect, if not demand. Blackman’s body became conditioned to the abuse: she could drink a bottle of whisky each night, then hop in the van the next morning, inured to the ill effects. And off to the next city she’d roll, to do it all over again. [read]

Talking Smack: Honest Conversations About Drugs was published on 23 July 2014 by University of Queensland Press. The book is available in paperback (RRP $29.95) at bookstores throughout Australia, and as an ebook throughout the world – click here to buy.